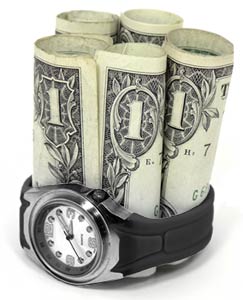 My son loves the kid flick – Spy Kids 4: All The Time In The World.

Allow me to confuse you alittle bit about the plot.

The bad guy is named Tick-Tock but the same actor plays the other bad guy named Time Keeper. Their diabolic plan is to steal time.

“Time Keeper tells the kids the Armageddon device is used to transport him back in time to his father in the 1930s. Time Keeper is the child who was frozen in time when the time machine went haywire and froze him. His father spent his entire life trying to set him free, and he had to watch his father grow old and die. The chronos sapphire was then discovered and used to stop the machine, and unfroze Time Keeper, who was now a man in a boy’s body. Everything was gone, and Time Keeper wants more time with his father because he regrets everything….

Cecil tells him that he can’t travel back in time and change it. In fact, all Time Keeper’s minions and Tick Tock himself are different versions of himself trying to go back in time, and that he will only cause Armageddon. Rebecca tells Time Keeper about how she felt when she lost her mother, but nothing can bring her back and you just have to move on. It’s not about how much time you have, but what you choose to do with it.” (http://www.themoviespoiler.com/Spoilers/spykids5.html)

Lately, I’ve been thinking about “time” and how I spend it. Funny how we say “spend” like we got a wallet of “time” dollars. As a matter of fact, we only have 24-hours per day and once spent we can’t get it back, so we must learn to distribute it wisely.

I wanted to take a close look at my personal schedule and see how many time dollars I’m wasting, investing, and/or putting to good use.

I suggest you do the same and lets see where we can redeem the time?

Ok, I wrote my schedule down and after doing that I can see that I need to create a watch that stops time or get me a Delorean car to travel back in time.

← Not Of This World (NOTW)
Collage – The Katinas →